Again, the cost of travelling forced the Club to leave the Northern League and for a time. Whitby reverted to playing friendlies only, a step which put the club into near obscurity. 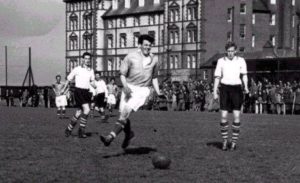 After World War One, the town of Whitby had two clubs, both playing in the Scarborough and District League, Whitby Whitehall Swifts and Whitby Town. Ever conscious of Whitby’s more illustrious past, the two clubs in 1926, decided to amalgamate as Whitby United. The new club was admitted into the Northern League and the club’s name was changed to Whitby Town in 1949.

The Club reached a new height in the Amateur Cup days. In 1964 they reached the Quarter finals and the following year they made it all the way to Wembley, losing 3-1 to Hendon. 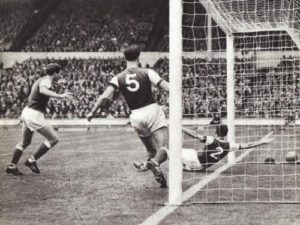 Jimmy Mulvanney’s shot crossing the line for Whitby at Wembley

The Northern League Cup has been won six times and the North Riding Senior Cup won on five occasions. Whitby were also successful in the short lived Rothman’s National Knockout Cup, winning it in 1976 and 1978.

Over the years, Whitby have had several illustrious managers. Dave Richardson was a former Blues’ Boss before progressing through senior soccer to become Director of Coaching at the Football Association. More recently, two former Scotland Internationals and World Cup Finalists have taken charge at the Turnbull, The ex-Leeds United stars David Harvey and Eddie Gray both managed and played for Whitby Town in Northern League matches. The latter setting the foundations for the team that has become successful over recent years. Other ex-internationals to grace the Turnbull turf include Peter Lorimer (Leeds and Scotland) and Sunderland’s FA Cup winning skipper Bobby Kerr.

In 1983-84, Whitby came to national prominence when they came back from two goals down to beat Halifax Town 3-2 in the FA Cup first round proper. They were beaten by a late penalty at Wigan in the 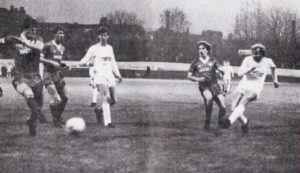 following round. The same season, Whitby reached the quarter finals of the FA Trophy for the first time losing to Dagenham in a replay.

In 1992-93, Whitby Town won the Northern League Championship for the first time in their history. Unfortunately due to circumstances completely beyond their control, the Club were denied promotion to the Northern Premier League.

In December 1995 the Club appointed Harry Dunn as manager. By the end of the season, he had taken Whitby to another Northern League Cup Final victory.

The following season, 1996-97, the Club went from strength to strength. A 0-0 draw against Hull City in the first round proper of the FA Cup, was played at Scarborough oh police advice, in a remarkable replay at Boothferry Park, Whitby came from behind to take a 4-3 lead 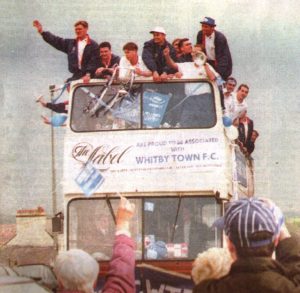 which was held until the dying seconds of the game. With only 49 seconds remaining, Hull levelled the score and went on to win 8-4 in extra time. Superior fitness told in the end. This was to be one of only five defeats in the entire season.

The Club came from behind in the Northern League race, winning the Championship in style from neighbours, Billingham Synthonia, before completing an amazing “double” by winning the FA Carlsberg Vase at Wembley, beating North Ferriby United by 3-0.

The following season, 1997-98 saw continued success at the Turnbull Ground when the Club won the UniBond League First Division Championship by a margin of 7 points at their first attempt as well as beating York City 3-0 in the final of the North Riding Senior Cup to become holders for a fifth time. Whitby again reached the final of the NRSC in 1999 only for York to gain revenge by winning 4-2. In the 1999-2000 season, the Seasiders finished 12th in the UniBond Premier League and were beaten finalists in the President’s Cup, losing over two legs to Trafford after a penalty shoot-out. 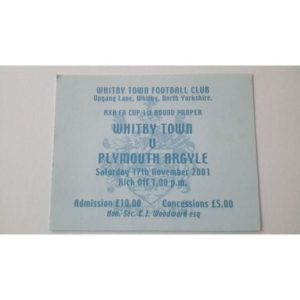 The 2001-2002 season saw Whitby finish in a disappointing 15th in the league, but got to the FA Cup 1st Round for the 7th time, only to lose out to Plymouth Argyle after a replay, 3-2. The first game was at the Turnbull Ground in front of the BBC Match of the Day Cameras.

Season 2003/04 saw another excellent cup run halted at the hands of Hartlepool United. The blues put up a spririted show at Victoria Park but fell 4-0 to an excellent Pools side. Whitby also managed to finish in the play off zone for the new Conference North but went out on penalties to Radcliffe Borough, a team they had beaten 5-0, 6-2 and 1-0, in the regular season.

Long time manager Harry Dunn was replaced by Dave Logan early in season 2004/05 after a string of poor performances. The former Blues stalwart turned the side around as they equalled a club record 19 games without defeat and in the process made the UniBond League promotion play-offs. They lost in the semi-final to Farsley Celtic after extra-time. Town also reached the final of the UniBond Challenge Cup but lost in extra time to Matlock Town.

Since Logan left at the end of season 2005/06, former Reading and Wales striker Lee Nogan spent two seasons at the Turnbull, finishing 13th and leaving in October 2007, after FA Trophy defeat at Ossett Town. Phil Brumwell guided the team to safety, with Nogan showing notable class by returning to the club as a player.

Brumwell was joined by and eventually succeeded by ex-Blyth Spartans assistant Graham Clarke in summer 2009. Town would’ve been relegated for the first time in their history, at the end of that season, if not for victories over Witton Albion and title-chasing Ilkeston Town on the final day, plus Cammell Laird’s demotion for ground issues.

The following season saw Dunn succeed Clarke for a second spell, but after a mid-table finish, resigned in September 2010, claiming he’d taken the Blues as far as he could. Ex-Newcastle United and Northern Ireland midfielder Tommy Cassidy replaced Dunn, lasting almost a year exactly, before leaving by mutual consent in October 2011.

Ironically, it was a man with strong Sunderland connections who took over from the former Magpie. Darren Williams, who made 200 appearances for the Wearsiders, was given his first managerial job, despite having joined just weeks earlier, as a player. Williams famously secured Town’s third last-day escape in five seasons, at Buxton, amid joyous scenes.

After more than four years at the helm, the popular Williams and assistant Dave Campbell, were replaced by ex-Guisborough Town boss Chris Hardy, assisted by Lee Bullock, in December 2015.